The discovery of a miracle! How Healthy Natural Products got started.

A nice story is connected to our very first cream:

Around 1950 a hairdresser and a friendly chemist became fascinated by the development of an anti-wrinkle cream.

The hairdresser (Niek Schiffers) was a true artist and hair and make up were his passion. In the 50’s Mr. Schiffers and his friend developed several successful hair products. But there was also an increasing demand for anti-wrinkle creams. Having had years of experimenting, they finally produced a fantastic anti-wrinkle cream based on the colloidal white clay powder Bentonite. This cream became the forerunner of today’s Supreme Direct Eye-Lift and Wrinkle Stop Eye.

Bentonite was often favored against wrinkles, but the secret of this cream was in the combination of Bentonite with a very special cellulose. It also cost them a lot of trouble to get the right cellulose and to ‘discover’ the right recipe. A minute stir more or less could bring everything up. But eventually they had made an anti-wrinkle cream with a fantastic result. The cream was also very useful in practice and in combination with make up.

Unfortunately, both the hairdresser and the chemist did not have major business ambitions; the products were sold at the hairdresser’s of Niek Schiffers exclusively.

In 1983 the Koopmans family came – coincidentally – to live next door to Niek Schiffers and his wife. Father Koopmans immediately saw business opportunities in this super product. In addition to his other companies, he started a company (Vincent 46 BV) to put this product into the market. In this way, a cosmetics company was born, which was taken over by daughter Gerdien later. Recently the name of the company was changed to Healthy Natural Products.

Picture: the laboratory of Niek Schiffers 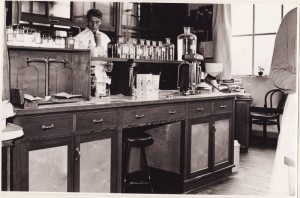